Being an animator has its creative ups and downs. Sometimes the director has very specific instructions on how to animate a shot. Sometimes you have full creative freedom. This shot I animated on Horton gave me the unique opportunity to pay tribute to one of my favorite Muppets, Boober Fraggle.

When I was given this shot, I had to make sure that the audience knew this Who was a construction worker to set up the joke. My only props to sell this idea were a very plain looking hard-hat and a set of blueprints. Since the Whos look very similar in their general design, (outside of their fur) I wanted to place this hard hat on the character in the most appealing way possible. When I started animating this guy I had a Fraggle Rock DVD playing in the background and when it came down to putting the hard-hat on the character, I imagined how Boober Fraggle would put on his hat. The idea went over well and it stayed in the film. 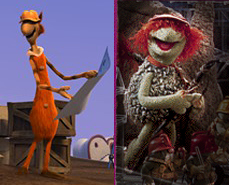